This is an example story that was to illustrate principles of family communication.

Mary recently got genetic testing after receiving a diagnosis of breast cancer. Her testing showed that she had a pathogenic variant in the BRCA2 gene, which means that genetic variant caused her breast cancer.

Mary wanted to know if any of her relatives had this variant too. She knew that her children, sisters, and brothers all had a 50% chance of having the same variant, but she was curious about her first cousin, who had breast cancer a few years earlier. This cousin’s mother, Mary’s maternal aunt, had died of ovarian cancer several years ago. 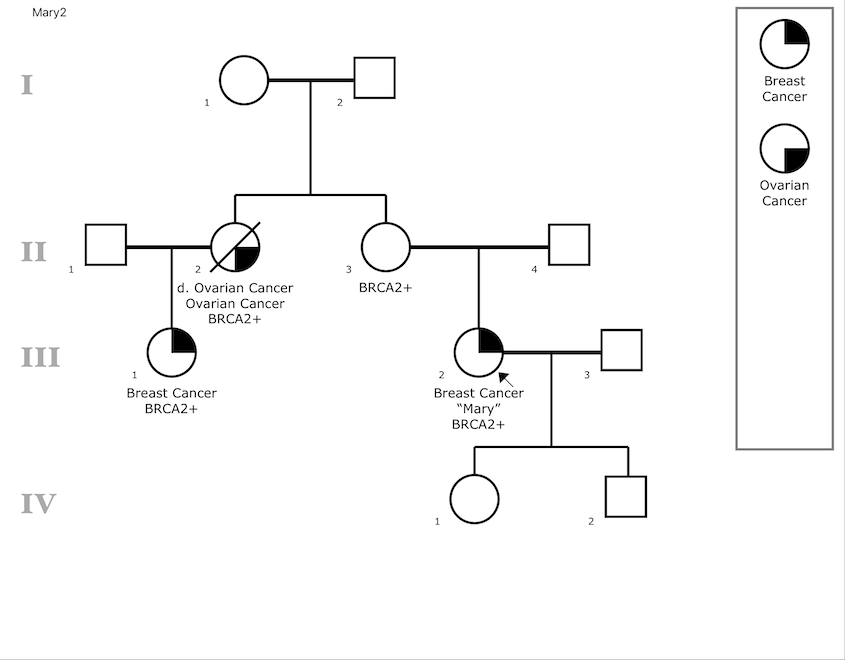 Mary began to wonder if might be able to find other, more distant relatives with the BRCA2 variant. These relatives might have an increased risk for getting breast and ovarian cancer. Mary bought an ancestry testing kit. When she looked at her results, she saw that the ancestry testing company had listed three individuals who had also gotten tested and were found to be related to her. Some of these individuals had listed their contact information, too.

Mary reached out to these distant relatives and explained she had a pathogenic BRCA2 variant which caused her to get breast cancer. She asked if they would be interested in getting tested for the same variant, because if they knew they had the variant, they could start getting preventive measures like screening and help their close relatives get tested too.

Inspired by her earlier discovery with her first cousin, Mary also asked these relatives if they might be interested in connecting their family trees with her own. She explained that by laying out exactly how they were related to each other, they might be able to identify relatives “in between” who might have the variant and be at risk for cancer.

Two relatives responded to Mary through the ancestry testing site. One was a woman who already got genetic testing because she had breast cancer at a later age than Mary. This relative had the same variant in BRCA2, which Mary confirmed by exchanging genetic test reports with her. Mary began to work with this relative on connecting their family trees. It turned out that the relative and Mary were third cousins: they shared a great-great-grandmother on Mary’s mother’s side and the relative’s father’s side. Mary and the relative contacted the connecting relatives that they knew tell them about the variant and help them get testing. When they got stuck, they used other public resources to find and contact relatives that they had not met personally

The other relative who responded to Mary was a man had never had cancer or genetic testing. He was worried about the cancer risk for his daughters. This man had been adopted as a baby and did not know a lot about his family history. He was excited about the possibility of getting more information about his family’s health history. Mary sent this man her genetic testing report with the variant. She sent him information about seeing a genetic counselor so that he could get tested.